Tom Kelsey, commercial broker with Lorimont Place, Ltd. confirmed the sale of the Ponderosa Steak house property located at the I-55 Perryville interchange. Kelsey said it was his understanding the former steakhouse would be converted into a Chinese buffet operation featuring a hibachi grill and other amenities.  The Cape Girardeau based broker said the 7,900 square-foot high traffic and visibility restaurant located on 1.5 acres was sold to Kaizhi Enterprises, LLC based in Cape Girardeau.  The restaurant would be called CHIN and would open by February or March. 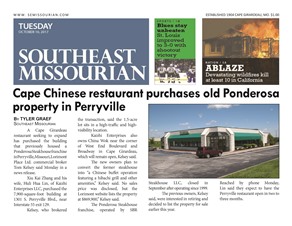 The owners presently own the China Wok, located at Broadway and West End Blvd. in Cape and that restaurant would continue to be open. The former Ponderosa franchise opened in 1999 and was in operation up until the end of September.  It was operated by SBR Steakhouse, LLC located in Perryville. Kelsey said the previous owners were interested in retiring and the property was listed with his commercial real estate company earlier this year.  No sales price was disclosed, but the Lorimont website lists the property at $869,900.