A former long-time Cape Girardeau theatre location will be occupied by a major tool retailer.  Harbor Freight Tools announced  its plan to open a store in Cape Girardeau’s Town Plaza this fall. Tom Kelsey, commercial broker with Lorimont Place, Ltd., who represented the development owner in the lease, Greater Missouri Builder,s said the national company had been looking at the Southeast Missouri market for several years. A spokesman for Harbor Freight confirmed this will be the 18th store in Missouri. The company is a discount retailer of automotive, air and power tools, shop equipment and hand tools, with existing locations in Poplar Bluff and Farmington, Missouri, and Paducah, Kentucky. The company’s slogan is to deliver "high-quality tools at ridiculously low prices." 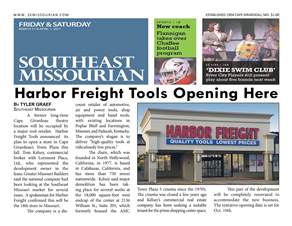 The chain, which was founded in North Hollywood, California, in 1977, is based in Calabasas, California, and has more than 750 stores nationwide.  Kelsey said major demolition has been taking place for several weeks at the 18,000 square-foot west endcap of the center at 2136 William St., Suite 205, which formerly housed the AMC Town Plaza 5 cinema since the 1970’s.  The cinema was closed a few years ago and Kelsey’s commercial real estate company has been seeking a suitable tenant for the prime shopping center space.  This part of the development will be completely renovated to accommodate the new business. The tentative opening date is set for Oct. 10th.