A Southeast Missouri banking facility in New Madrid will be displaying a new banking sign in the very near future according to Tom Kelsey, Broker with Lorimont Commercial Real Estate in Cape Girardeau, who handled the recent sale.  The former New Madrid Region’s Bank facility is located at 601 S. Highway 61 in the bootheel city.  Kelsey said because of a confidentiality agreement the buyer could not be disclosed at this time, however he expected an announcement made in the near future. 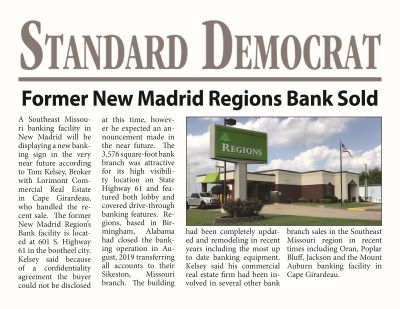 The 3,576 square-foot bank branch was attractive for its high visibility location on State Highway 61 and featured both lobby and covered drive-through banking features.  Regions, based in Birmingham, Alabama had closed the banking operation in August, 2019 transferring all accounts to their Sikeston, Missouri branch.  The building had been completely updated and remodeling in recent years including the most up to date banking equipment. Kelsey said his commercial real estate firm had been involved in several other bank branch sales in the Southeast Missouri region in recent times including Oran, Poplar Bluff, Jackson and the Mount Auburn banking facility in Cape Girardeau.